The journey to spiritual awareness is one trodden by many people, from all walks of life.

Finding solace in the discipline of yoga, as well as a better lifestyle and a healthier mind is something millions of people around the world do every single year. In the United States alone, it is believed that more than 37 million people are ‘yogis’, with 80 million likely to have tried it at some point. They are astounding figures, no doubt fueled by exposure by a number of celebrities.

When a high-profile figure does something, people follow, imitate and dabble themselves, and yoga is no different. If a famous person goes on a talk show and discusses their figure or health in relation to yoga, then normal citizens will follow their advice. That is one reason why yoga continues to spread in popularity, through positive role models.

One demographic which is on the rise across the United States is males doing yoga. It was once a significant split between female and male, but in recent years that has changed. The number of males yogis rose by 150% between 2012 and 2016, with 28% of all yogis now thought to be male. What was seen as a female practice has spread rapidly into masculine circles. Why is that? It might be something to do with these rather significant male role models, all of whom not only practice yoga. Often, our perception of a male star is of fast cars, thrill-seekers and the like, but these three buck the trend, not only by doing yoga, but also a range of other weird and wonderful hobbies.

Downey Jr. is a man who has seen his fair share of ups and downs, but who is now associated mainly with the Iron Man role in the Marvel Universe. He has something of a tough guy image because of his stint as Tony Stark, which makes his association with yoga interesting, and attractive for those training and wanting to be fitter. “Yoga is a kind of meditation for me,” he once said in an interview. “You get this strange sense of calmness even when you’re putting your body through some very difficult and testing trials.” He is not against putting himself through different trials either, in 2004 the former brat pack star released a jazz album entitled the futurist, a relaxing and laid-back project which is also very much in contrast to the bold Iron Man series.

Vin Diesel is well known for his high-octane performances in the Fast and Furious films, as well as a wide range of other tough action movies. Part of his intense routine involves yoga, and Pilates, as a supplement to rigorous three days workouts. His routine focuses on high-octane weight work for a few days, then a cool down period in which he uses yoga to complement his other activities. The 53-year-old is a man of many surprises, and as well as yoga, he is a well-known Dungeons and Dragons fan, which requires plenty of focus and close attention like yoga. There are even rumors of him having hosted a game on the set of Chronicles of Riddick which included Thandie Newton, Karl Urban, and Dame Judie Dench.

Brad Pitt is another actor who used yoga to help him get in shape. He dabbled when training for his role as Cliff Booth in Once Upon a Time in Hollywood. He won an Oscar for Best Supporting Actor in the Tarantino flick and claimed it was to aid in his mindfulness and improve his breathing patterns. It is believed he was introduced to yoga by Demi Moore, and she may have introduced him to his other passion too. Like Vin Diesel, he defies the usual stereotype of an action hero, as he also makes pottery in his own time, doubtless to help with focus and concentration in the same way yoga does. One wonders if Moore’s stint using the wheel in the film Ghost inspired Pitt’s love for the art?

Aiyana Fraley is a mother, reiki master teacher, massage therapist educator and yoga teacher. She lives in St. Petersburg, Florida with her daughter, husband and adorable pets. She is a beach lover, moon gazer and loves sharing her holistic lifestyle and wellness tips on her blog. Aiyana has an MA in journalism from the University of Miami, a BA in anthropology from Florida International University, and a degree in Natural Health and Massage from Florida College of Natural Health.

Essential Oils, Tapping and Prayer: How I Am Coping With Grief

New Year Rituals I Live By

Self-Love Through Yoga: Foster A Positive Relationship With...

I am a reiki master teacher, kundalini yoga instructor and massage therapist in St. Petersburg, Florida. I have dedicated the last 20 years to the healing arts honing my skills as a massage therapist and energy worker. I share what I’ve learned through my practice here on my blog. I believe we can all heal ourselves holistically using reiki, yoga, essential oils and a healthy diet. I hope to inspire and nurture your spiritual practice and lifestyle. 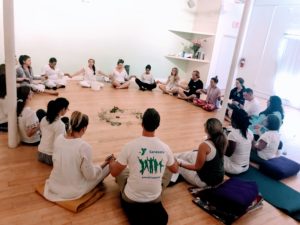 Reiki is a healing art from Japan that is used to relieve stress, heal physical and mental trauma, and support spiritual awakening. Sharing and teaching reiki is my passion. Join the next training. Read More